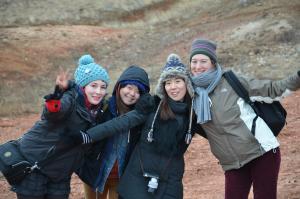 How strange to each other can be people from Korea, France, Germany and Russia? Ann, Elena, Lucie, Paulina and Soyoung came to Iceland two weeks ago to participate in Photo Marathon workcamp. Comming from different backgrounds, their attention was caught by a different range of Icelandic people: their traditional sweaters, hats, beards or even their crazy hairstyles.

They have been wandering around the city, briefly entering into some people‘ lives and asking to take picture of them. Chasing portraits around Reykjavik became their daily task and photos made during the camp turned into the „Strangers“ exhibition. Just like our volunteers entered into those strangers‘ lives, their pictures entered into the afternoon of Bio Paradis visitors‘.

After two weeks volunteering and living in friendly atmosphere, our female workcamp agreed that spending time in multicultural environment is the perfect way to understand that „strange“ people can be even more similar to us than we imagined before.