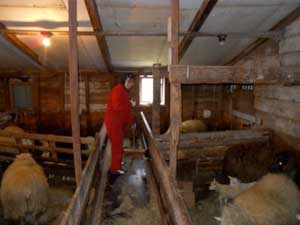 Our group of volunteers triumphantly return from their two week battle against an army of 300 plus sheep!

Our volunteers gathered from as wide as Japan, Germany, France, The Netherlands, UK and Italy, and the sheep gathered  (or were herded) from the vast plains, valleys and mountains of the southern regions of Iceland.

Located on the sandy flat lands overlooked by the mighty Mýrdalsjökull we had the pleasure (and struggle) to take part in a still very alive Icelandic tradition: the Réttir.

Our days consisted of separating the local sheep to their respective farmers, leading them home (with the help of a few dogs and quad bikes) separating the lambs and weighing each individually, returning the ewes and rams back to the fields… Though this sounds like a pretty straight forward task, I can assure you that it really was an endurance of will power… the sheep are surprisingly strong (we sustained some bruises as physical reminders), are quite hefty (up to 80kg),  can jump incredibly high and as the saying goes they follow each other mindlessly (like sheep); once one sheep set the path for escape, many followed!

A very vivid memory will remain of this time… the noises of hundreds of confused sheep bleeping for hours, the strange smells in the sheep house, the panic when the bold creatures made a break-away for freedom and the thud of charging sheep running directly into your stomach! A great insight into the life of Icelandic farming.