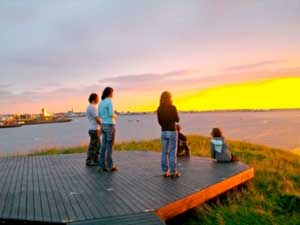 One can say that we were influenced by the energy of the Peace Tower built on the Videy island in the memory of John Lennon.

One may say that there is nothing on this island with three houses than…peace. But, I say there was something magical on this small island so close to Reykjavik and some of this magic was for sure our fantastic group atmosphere.

So, for two weeks, Videy Island was populated by eleven different and really nice people from around the world: Korea, Italy, Israel, France, Germany, Russia and Romania. It became our island since we were the only ones also there by night. We got to know this island like no other of the tourists stopping by. We walked all the beaches in our goal of cleaning the coastline, we climbed the rocks, admired the lava formations, walked through the ruines of the former fishing village and imagined how people used to live here hundreds of years ago.

Videy became the island were women picked cumin seeds like in a retro picture of a slow and peaceful life, where we saw our first Northen Lights and we found some peace of mind. And for me, as a leader, it became more than a workcamp.