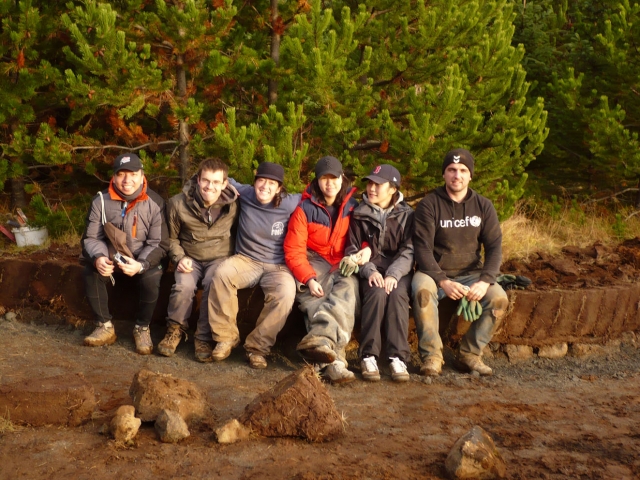 Last week we finished our workcamp which brought us a lot of memorable moments and interesting experiences.

The location of the workcamp was the capital of Iceland, Reykjavík, which is the northernmost capital in the world. The project site was in an eastern suburb of Reykjavík, called Grafarholt, centred around the lake Reynisvatn. Grafarholt is a very new, rapidly improving residential area of Reykjavík. The area of Reynisvatn is a beautiful nature reserve area with hills, with a recently planted forest and with a lake which lies right next to Grafarholt. The lake and surroundings provide excellent place for recreation and leisure with its nice hiking paths and spectacular nature. The lake itself is also a very popular spot to fish for trout.

Our accommodation was in Vatnsstígur in downtown Reykjavík. The temporary participants, who were EVS volunteers from SEEDS, were staying in their own apartment in Fellsmúli.

The topic of the workcamp was construction of a recreational spot for schoolchildren, hikers and for families. These spots have been built to motivate people from the surroundings to spend their free time outdoors in an active way. The work was led and supervised by our local host who also lives in this area. During the construction we used only natural materials like stones, gravel and turf which was cut and transported to site beforehand.

The job started every morning around nine. Usually our host came to pick us up and brought us to the site which is just about 10 kilometres far from the centre. On a daily basis two of the temporary volunteers joined us and they were also picked up on the way to the work site.

The lunch during the weekdays was given by one of the local schools in Grafaholt. The breakfasts and dinners were always prepared by the volunteers.

It was always a very important aim for our host and also for us to get in more touch with the locals and to try to involve and encourage children from the area to take an active role in the construction of the site which helps to improve the feeling of ownership from their sides. On Friday mornings we had the chance to talk and introduce our job and volunteering to some classes. It was always fun to speak about our adventures and the nice time we have as volunteers. Motivating a younger generation to volunteer in Iceland is very important as there is such a low number of Icelandic volunteers.

The free time activities during the camp were really various due to the very advantageous location of our accommodation. Downtown Reykjavík provides plenty of nice events both weekday and weekends all over the year.

As a closing of the camp our host took our volunteers for an amazing excursion to the Golden Circle and an international evening was organised which became a kind of traditional event for all of our camps during the last years within Seeds.

Thank you for your cooperation!